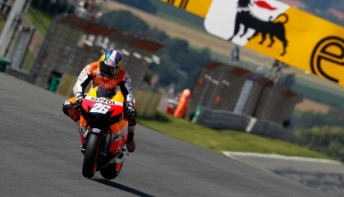 Pedrosa took the win after Australian team-mate Casey Stoner fell off his Honda while challenging the Spaniard on the final lap.

A fast-starting Pedrosa was quickly overhauled by Stoner in the opening laps, with Stoner leading the way until his team-mate slipped by with 11 laps remaining.

See below for results.