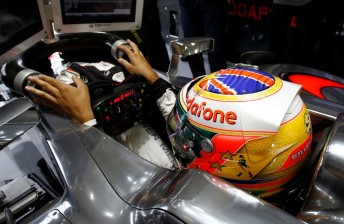 McLaren’s Lewis Hamilton has set the practice pace at a wet Silverstone ahead of this weekend’s British Grand Prix.

Heavy rain lashed the Northamptonshire venue during both 90 minute sessions, leaving Hamilton to record a best time of just 1:56.34s.

Romain Grosjean had put Lotus on top in the morning session – his 1:56.55s effort proving 0.28s better than that recorded by Australian Daniel Ricciardo.

The biggest incident of the day belonged to Bruno Senna, who crashed his Williams at the exit of Becketts during Practice 2.

Fernando Alonso also found the barriers, with his Ferrari losing its latest specification front-wing after a premature switch to intermediate tyres.

Ricciardo and compatriot Mark Webber were two of four drivers that elected not to set a flying lap in the second session due to the restricted number of wet and intermediate tyres available to teams for the weekend.

A third 60 minute practice will take place tomorrow prior to qualifying.

See below for Speedcafe.com’s Race Guide for the British Grand Prix