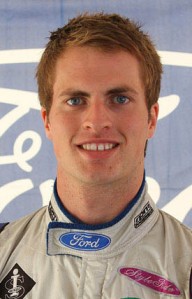 Sonic Motor Racing driver Garry Jacobson has been ruled out of the remaining two Formula Ford races at Townsville after being involved in a three-car incident today.

Shae Davies, Jacobson and Rhett Noonan came to grief on Lap 6 of 11, with Jacobson receiving the wildest ride, as his Sonic Motor Racing Services Mygale launched into a barrel roll out of the quick turn 10 sweeper.

All three drivers emerged uninjured in the incident, which started when Davies’ Spectrum jumped out of gear through the bumps on the street circuit.

Jacobson came into the round six points off title leader Jack Le Brocq, who went on to win the race.

Jacobson said he could do little about avoiding the slowing Davies.

“The car in front jumped into neutral, and slowed right down,” Jacobson said.

“I was lining him up for the next corner, and we made contact. The remains of Shae Davies’ helmet after the incident

“Oddly enough, throughout the roll over I felt pretty comfortable. Once the car was going down the track on the rollbar it wasn’t too bad.

“I have to thank Shae (Davies) for helping me out of the car when it was upside down, it was bit difficult with my gloves and helmet still on.”

While Jacobson won’t be taking in further part in the weekend’s proceedings, his Sonic team is working hard to resurrect the car of Noonan, which suffered a broken bell housing and a flash fire in the incident.

Davies’s Borland Racing Developments team meanwhile are looking to have the number 6 car back on the grid for the first race at 845 tomorrow.