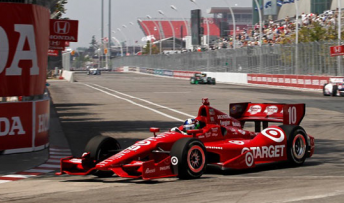 Dario Franchitti had a positive start to the Honda Indy Toronto race weekend at Exhibition Place.

The top 21 cars were separated by one second.

Justin Wilson, the 2010 pole sitter, was fourth on the time chart ahead of Australian Penske driver Ryan Briscoe. Briscoe’s team-mate Will Power was seventh fastest.

Wilson was involved in a pit lane incident early in the morning session when his car “refused to go into neutral” and slid into the Dragon Racing car of Sebastien Bourdais.

Toronto’s James Hinchcliffe did not participate in the afternoon session because of a mechanical issue with the GoDaddy.com car. The Andretti Autosport team will replace the Chevrolet engine, which will result in a 10-grid spot penalty for the July 8 race.

Quebec native Alex Tagliani, driving the Team Barracuda-BHA car, also will incur a 10-grid spot penalty as the team chose to install its fourth fresh Honda engine of the season.