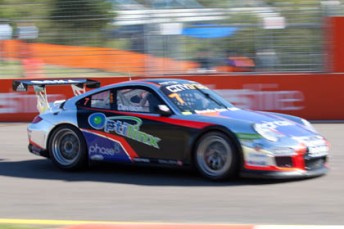 After claiming pole position by the closest margin in Carrera Cup Australia history (0.0027secs) over Jonny Reid, Davison struggled off the start line in Race 1 and lost the lead to Reid.

Davison spent the majority of the 14-lap race behind the New Zealander, eventually taking the lead on the second-to-last lap and holding on to take his fourth win of the 2012 season.

The late-race battle between Davison and Reid allowed Craig Baird and Daniel Gaunt to close in on the leading duo in the latter stages, with Baird and Gaunt taking third and fourth.

For Davison, the victory was a welcome return to form after difficulties endured at the championship’s last round at Phillip Island.

“It’s obviously brilliant every time you get a race win, but the thing I’m most happy about is that we haven’t had the pace to race with the front guys since the Australian Grand Prix,” said Davison.

“We’ve done a lot of work since Phillip Island and we’ve now managed to bridge that one-to-two tenths gap to them. Even though I had a horrible start and had a lot of wheel spin we had the pace once everything had warmed up. We’re very happy.”

Steven Richards rounded out the top five in the race from Nick Foster, Matt Kingsley, Andre Heimgartner, Tom Tweedie and Elite Class victor Shane Smollen in 10th, who narrowly finishing in the top-10 after a late challenge from guest driver Tim Leahey.

Davison now trails Baird in the Outright standings by 78 points, with Reid jumping ahead of Gaunt to third in points a further 113 points behind Davison.

Porsche City Index Carrera Cup Australia will hold its remaining two races of the Townsville round on Sunday, beginning with Race 2 at 1030.