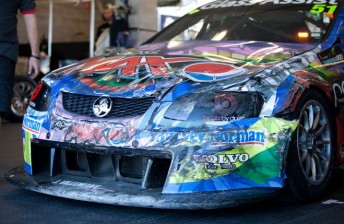 The 1997 Formula 1 World Champion became stuck in the tyre barrier at the exit of Turn 3 with just 18 seconds remaining.

The #51 Commodore suffered minor front-end damage in the incident and is expected to be repaired in time for this afternoon’s final hit-out.

The red flags ensured Jamie Whincup would end the session with the fastest time.

The TeamVodafone driver sat atop the times for the majority of the session, setting his best of 1:13.54s prior to the halfway mark.

Lee Holdsworth moved to within 0.10s of the championship leader in the closing stages, while Rick Kelly, David Reynolds, Russell Ingall, Craig Lowndes, Todd Kelly, Steve Owen, Will Davison and James Moffat rounded out the top 10.

Prior to his mistake, Villeneuve had taken a further 1.1s from his Practice 2 best to lap within 2.3s of Whincup.

The final red flag was the second of the session, with debris at Turn 12 having caused an early stoppage.

As usual, tyre condition played a large role in the final result, with title contender Mark Winterbottom finishing the session down in just 25th position.

The fourth and final practice session of the day will get underway at 1435 local time.

See below for the full Practice 3 times