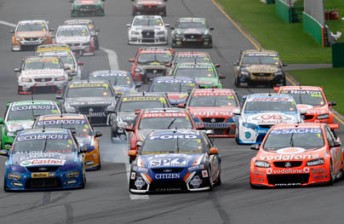 The battle for sponsorship dollars in the V8 Supercars Championship is heating up as the majority of teams continue to work on locking in deals for the 2013 season.

Speedcafe.com understands that 19 of the 28 cars in the field do not currently have a naming rights sponsor signed for next year.

Yesterday’s announcement that Tradingpost will leave Ford Performance Racing at the conclusion of 2012 comes just weeks after Vodafone confirmed the imminent withdrawal of its support from fellow front-running squad Triple Eight Race Engineering.

FPR’s association with long-time backer Orrcon is also up for renewal at year’s end, while the sponsor search continues for the Charlie Schwerkolt-owned entry set to be added to the factory Ford squad.

Elsewhere in the field, it is believed that multi-car outfits Kelly Racing, Dick Johnson Racing and Brad Jones Racing are all yet to close ongoing negotiations with any of their respective naming rights backers.

James Rosenberg Racing and Tony D’Alberto Racing are similarly yet to ink major deals for next year, while Tekno Autosports – which has competed without a full-time sponsor this year – also remains in the marketplace.

The sponsorship chase coincides with continued uncertainty regarding the category’s new media rights deal, which is also expected to have a significant impact on the size of the teams’ future earnings.

According to Dick Johnson Racing’s commercial director Scott Jennings, the sheer number of sponsorship deals up for renewal has intensified an already competitive market.

“It’s tough out there at the minute for everybody,” Jennings told Speedcafe.com.

“It’s going to be hard this year because of the amount of naming rights sponsors that have already indicated that they’re not remaining in the sport.

“It’s come to a point where we’ve got to think outside the square and come up with ways to attract new sponsors to the category.”

“There is a lot of competition at the moment, but that’s not just limited to V8 Supercars, that’s with any sport. Globally it’s a very competitive market, which brings with it its challenges.”

Ryan, however, insists that the situation is by no means a negative reflection on the category’s health.

“I think the sport is as healthy as it has ever been, and you can see that the reasons some brands are leaving are reasons that have nothing to do with the sport.

“I’ve got absolutely no doubt that teams will roll out next year as strong commercially as they have this year.”