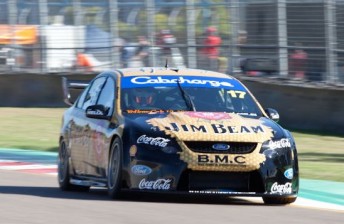 Steven Johnson has led a trio of Dick Johnson Racing Falcons at the top of the order in Practice 2 for the V8 Supercars at the Sucrogen Townsville 400.

The second session to be run for the endurance co-drivers and bottom 50 percent of the championship saw Johnson lap in a best of 1:14.19s.

A single red flag for debris proved the only stoppage during the 30 minutes.

Jacques Villeneuve was again slowest of the 28 cars, but managed to chip almost a full second from his morning best to end up just 2.64s from the pace.

Nick Percat was just one place further up the order in Garth Tander’s Holden Racing Team Commodore having completed just four laps. The Dunlop Series regular flat-spotted his set of pre-marked soft tyres with a lock-up at Turn 2 during the early minutes of the session.

All 28 regular championship drivers will take part in Practice 3, set to kick-off at 1255 local time.