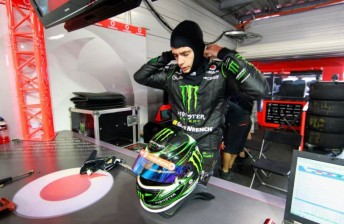 Triple Eight Race Engineering’s Scott Pye has topped a competitive opening day of practice for the Dunlop Series in Townsville.

The Monster-backed Holden driver traded blows with fellow young guns Chaz Mostert and Nick Percat in the final minutes of Practice 2 before emerging fastest with a 1:14.84s best.

Mostert pipped Percat for second, with the top three separated by just 0.08s.

Walsh endured minor incidents with Tim Blanchard and David Russell during the session – the first of which saw the Simpro Falcon turn into its Jaylec-backed rival at the final corner.

A 1:15.13s lap had earlier proven enough for Percat to beat Miedecke and Pye into the top spot in the morning’s first session.

Mostert had been just eighth on the time sheets at the end of Practice 1 having brushed one of the Reid Park circuit’s unforgiving concrete walls.