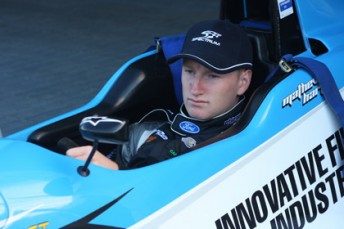 Currently second in the title chase, Hart is looking to bridge a four point gap to current leader Jack Le Brocq, with the season reaching its halfway point this weekend.

For Hart, heading combined Friday practice times for the second consecutive round bodes well for a big weekend.

“It was a good start, I didn’t think I would be in P1 at the end of the day having never raced here before,” Hart said.

“To be honest, straight off the truck we haven’t had to make many changes to the car.
“The track is awesome fun; the flip flop over the back part is a lot like the Grand Prix circuit in Melbourne.

“There’s very little room for error, it’s really enjoyable with all of the bumps, kerbs and painted lines on the circuit.”

Second place for the day was Garry Jacobson, who quickly came to grips with the 2.86km long circuit.

Third for the day was Queenslander Shae Davies, who carries momentum into this weekend’s races after claiming a pair of victories on his North American debut last weekend.

On track action continues tomorrow with qualifying at 800, with the opening 11 lap race scheduled for 1045.