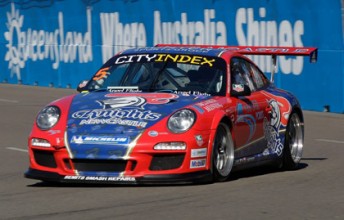 Jonny Reid has set his sights on Townsville victory after topping the times in both Friday practice sessions for Round 5 of the Porsche City Index Carrera Cup Australia championship.

Behind the leading trio in the Friday times were Steven Richards, Daniel Gaunt, Nick Foster, Tom Tweedie and Matt Kingsley – all within a second of Reid.

The Kiwi hopes for a strong weekend after his dominant Race 3 win at the championship’s last round at Phillip Island.

“It’s a very promising start to the weekend. Everyone is working very hard and we all have the same goal,” said Reid.

“You can see by the timesheets just how close the competition is, so anything can happen out there this weekend.

“We have a clear goal, and that’s to get out there and win three races this weekend and come away with maximum points and climb that championship ladder.”

The ninth fastest driver over the two Friday Practice sessions was late inclusion Tim Leahey, replacing Tony Bates while the championship regular continues his recovery from surgery after the Phillip Island round.

“I’m always excited to get away from work and go racing; it’s an itch that I never get to scratch, and this weekend we’re scratching it,” said Leahey.

“I was comfortable in the first session, and then I struggled a little bit when I started to push. I just need more time in the car, but it’s great to have a run.”

Porsche City Index Carrera Cup Australia is next on track at 855 Saturday morning for its qualifying session.