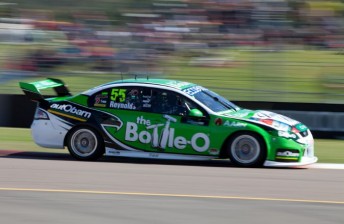 David Reynolds has edged out the two Tekno Autosports Holdens to end the opening day of practice for the V8 Supercars in Townsville with the fastest time.

The Bottle-O Racing Falcon driver set his 1:12.83s best in the final minutes, before even later efforts from Michael Patrizi and Jonathon Webb left the Tekno team-mates 0.04s and 0.2s adrift respectively.

Unlike the opening three sessions, Practice 4 ran green for its entire 30 minute duration.

A spin for Garth Tander at the exit of Turn 2 proved the session’s wildest moment, although the former series champion was able to rejoin unscathed under local yellow flags.

Shane van Gisbergen and James Moffat also raised eyebrows when the SP Tools Falcon made minor contact with the rear of the Norton entry at the exit of Turn 3, ruining a hotlap for the Kiwi.

Van Gisbergen’s Stone Brothers Racing team-mate Lee Holdsworth had a moment of his own right at the end of the 30 minutes – the IRWIN Tools Falcon becoming stranded in the Turn 2 run-off area with Holdsworth unable to select reverse.

Jacques Villeneuve returned to the circuit to complete 15 laps in Practice 4 following his incident with the Turn 3 exit wall in the previous session.

The Pepsi Max Commodore continued to run at the foot of the time sheets, despite moving into the 1:15s bracket for the first time.