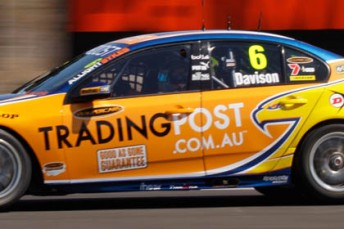 Trading Post has announced it will withdraw its support from Ford Performance Racing at the end of this season.

The online classifieds company, a division of Telstra, has made the decision after reviewing its overall promotional strategy.

FPR team principal Tim Edwards says that the hunt for a new backer is already underway.

“Let me be the first to say how thankful we are for the commitment of Tradingpost for without them we could not be in the strong position we find ourselves in this season,” Edwards said.

“While we are disappointed our flourishing relationship will be coming to an end after Homebush we are reassured that it is due to a strategic decision within their business rather than anything related to their relationship with FPR.

“We are already in discussion with a number of potential partners though now the news is in the public domain we expect a further spike in enquiries which we obviously welcome.

“Thankfully with the lead in the Team points and nine wins we are having the best season in our history so that should assist negotiations.”

After one season with BJR, the Trading Post support switched to FPR, backing Davison’s first season with the factory Ford team.

Ironically, Vodafone will also withdraw its support from V8 Supercars at the end of this year, leaving the leading two teams in the championship looking for new backers in 2013.