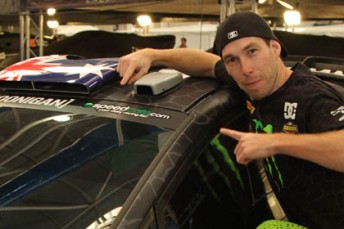 Chris Atkinson will make a return to the World Rally Championship in the next round at Rally Finland.

The Australian rally star will compete with Citroën Racing in Round 8 of the world title, pairing with regular co-driver Stéphane Prévot in a Citroën DS3 WRC.

It will be Akinson’s second WRC drive in a Citroen, having previously raced in the 2009 Rally of Ireland, finishing fifth.

Atkinson will compete with the Qatar World Rally Team, enjoying the support of Citroën Racing Technologies. The drive for Atkinson has become available after regular Qatar World Rally Team driver Nasser Al Attiyah will compete at the London Olympic Games in shooting.

After driving at Rally Mexico with Ken Block’s Monster World Rally Team, Atkinson is looking forward to his Finland challenge.

“We are really looking forward to racing with the Qatar World Rally Team,” said Atkinson.

“Competing in the best rally in the championship in the best WRC is a superb opportunity and I can’t wait to test the car to share my feeling for it with the team and give them my initial feedback. We don’t want to get ahead of ourselves, but we have got everything it takes to go after a good result here.”