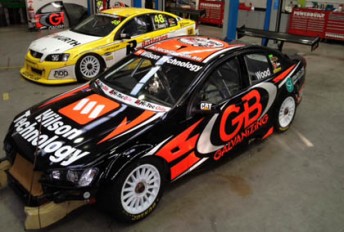 Dale Wood is hoping a chassis change will lead to better luck in Round 3 of the Dunlop Series at Twonsville this weekend.

GMR heads to Townsville with a reduced line-up following Marcus Zukanovic’s decision to return to running his own car. GMR will now prepare just two cars for Wood and team-mate Geoff Emery.

Wood, currently 19th in the series after a difficult opening two rounds, is optimistic of a strong result.

“The car ran pretty well at Townsville last year (in the hands of Daniel Jilesen) and we have a proven set-up. Out of the gate, it should work pretty well,” Wood told Speedcafe.com. Dale Wood on his motorbike, riding to victory in a recent Endurocross event

“I’d really like to be pushing near the top four or five, but it’s tough, and far tougher than I’ve found in the past few years. But I’m not complaining about that at all – the increased competitiveness of the Dunlop Series means you have to step up and do the best you can and not make any mistakes.”

In between Dunlop rounds, Woods competed in an Endurocross motorcycle event, winning the two-hour race at Flowerdale in Victoria.

Wood led home a strong field of 120 entrants and says that physically, it is one of the best preparations he could undertake.

“I used to do heaps of it, and I love it, but the risk factor is a little high for me to be doing it too often,” Wood said.

“It’s one of the best training exercises you can do. It’s very physical and really tests you.”

In other Dunlop Series news,Paul Morris returns to the series, driving a PMM-prepared Commodore VE with backing from Berocca Performance.

See below for the full entry list ahead of the Dunlop Series at Townsville.