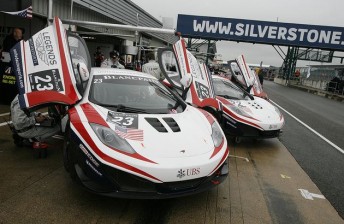 The United Autosports at Silverstone’s Blancpain event earlier this year

The squad raced a single Audi R8 LMS in this year’s event, but will return with two of the Woking-built vehicles that it campaigns in Europe’s thriving Blancpain Endurance Series.

The McLarens headline a 37-car provisional entry list for next February’s race set to be released by event organisers today.

Other entries expected for the outright class include the return of the Maranello Motorsport and Clearwater Racing Ferrari 458s, a pair of Porsche GT3Rs from German squad Muehlner Motorsport and a Ford GT from Asian Racing League.

Additionally, Speedcafe.com understands that reigning winners Phoenix Racing have expressed interest in running as many as three Audi R8s next year, although confirmation of its participation is believed to be awaiting funding approval from the German manufacturer. 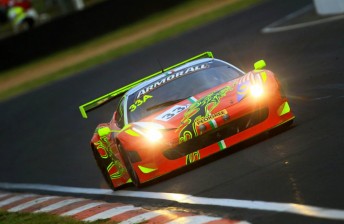 While the Black Falcon/Erebus Racing effort that entered a pair of Mercedes SLS AMGs in the 2012 event are also a notable omission from the provisional list, entries do not officially close until mid-December.

Event director James O’Brien, who has recently returned from a three-week competitor recruitment drive in Europe, says the early confirmation of the two United Autosport McLarens is a sign of the event’s growing international presence.

“It is very exciting to have a team of their calibre commit to returning at the event this early in the piece and it shows the growing respect in which the race is held overseas,” said O’Brien.

“People are very much aware of the Bathurst 12 Hour and that is reflected in the interest received to date.

“The McLaren is one of the most exciting of the ‘new’ GT3-specification cars now running in Europe and it is going to be very interesting to see them in action at Mount Panorama next February.”

No drivers have been confirmed for the McLaren entries, although the team’s Blancpain Series regular David Brabham would be a logical inclusion in the line-up.

In addition to the Outright contenders, 11 vehicles are being touted for the second and third tier GT class, including Porsches from Belgian outfits Speed Lover and Level Racing.

Seven cars have been nominated across the two Production Car classes, with a further eight in the revised Invitational divisions.

The Invitational runners will include Mal Rose’s ex-Garry Rogers Motorsport Holden Commodore V8 Supercar, which will be allowed to compete in the race for the first time next year.