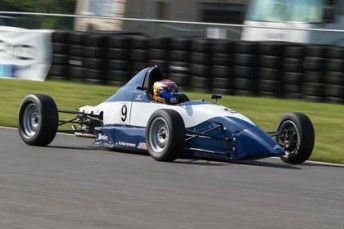 Australian Formula Ford driver Shae Davies has made his mark in his international racing debut, winning both races in the F1600 Formula F Championship Series at the New Jersey Motorsports Park in the United States.

Driving the Australian-built Spectrum 012H for Cape Motorsports with Wayne Taylor Racing, Davies’ qualified second behind team-mate Matias Köykka for Race 1 but had to claw his way back from as low as eighth after a poor start.

The 22-year-old clawed his way through the field, setting a fastest race lap of 1m22.870s and pulled away to take a resounding victory.

From pole in Race 2, Davies made no mistake in the rolling start, losing the lead twice briefly to his Finnish team-mate. 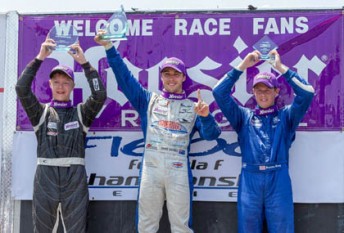 Davies held on to take his second race win from two starts in the series, with Köykkä right behind at the finish.

Davies will now turn his attention to next weekend’s fourth round of the Australian Formula Ford Championship in Townsville, but will return to the series at Mid-Ohio looking to repeat this weekend’s success.

“To make it two wins from two on my first race weekend in the USA feels awesome, especially in a brand new Spectrum,” Davies said.

“It was close racing there with Matias, and while I always want to win I know he is in the Championship fight so we had to be careful.

It was an enjoyable race and the perfect result for the team – they deserved nothing less than a 1-2 from this weekend.

“It’s been great to work with Cape Motorsports and Wayne Taylor Racing for the first time and a real asset to have Mitch Martin, my engineer from Australia with me this weekend also. I can’t wait to take the winner’s trophy back to Australia for Michael Borland and the team at Borland Racing Developments who as always have built an excellent car.

“Hopefully we can turn it on again in our 014 at Townsville next weekend.”