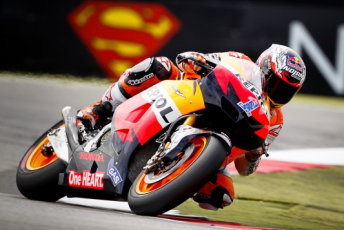 Casey Stoner has cruised to victory in the Dutch Grand Prix after title rival Jorge Lorenzo was taken out of the race in a first corner crash.

Yamaha rider Lorenzo was collected by an ambitious move from Alvaro Bautista at the first turn, taking out the championship leader.

Lorenzo’s demise was Stoner’s title gain, moving to equal championship points with Lorenzo at the top of the table with 11 rounds remaining.

The Australian’s win wasn’t assured, though, until the final 10 laps where he passed Honda team-mate Dani Pedrosa. Stoner pounced on a small mistake from the Spaniard to take the lead and ride on to a convincing win.

The victory is Stoner’s third win for the 2012 season.

Yamaha’s Ben Spies held third place until the start of the final lap before he was passed by Andrea Dovizioso (Tech 3 Yamaha).

The next round of the MotoGP championship will be held in Germany next weekend.