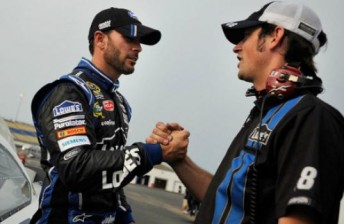 Jimmie Johnson and a crew member from his #48 team

The #48 Hendrick Chevrolet was the penultimate car to complete a lap in the session – knocking off previous fast-man Kyle Busch by just 0.07s.

“It was a good lap — qualifying has not been our strong suit in the last couple of years,” said Johnson.

“I’m very happy to get this pole today. My Chevy’s bad fast, and I’m looking forward to going racing.

The qualifying session was halted for 17 minutes due to strong winds after the first 20 cars had run.

The subsequent cooler track temperatures allowed many of those completing their laps after the wind storm to set faster times than those who ran early.

Australian Marcos Ambrose was one to run late in the second part of the session – ending up as the second fastest of the Ford runners in 12th.

“That was an okay lap. It wasn’t awesome but we have been struggling a bit all day,” he said.

“We got a favour there with the weather change and we will have a decent starting spot for tomorrow night.

“That weather change definitely helped us, no doubt about that. We have had two poles in two weeks so we can’t be greedy but if we can get a top-15 spot we will be happy.”