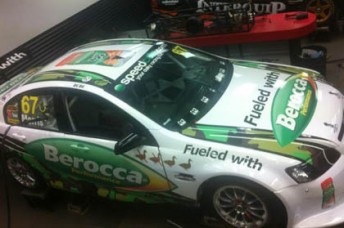 Paul Morris revealed pics of his car on Facebook this evening

Paul Morris has revealed the first images of his new-look Berocca-backed Holden Commodore VE that he will compete in at the Townsville street track.

Morris, known as ‘The Dude’ in the V8 Supercars paddock, released images of his Dunlop Series car on Facebook this evening.

The Commodore features support from Berocca, with Speedcafe.com branding on the windscreen.

Morris revealed to Speedcafe.com earlier this week that he was making his Development Series return, having not raced a V8 Supercar since the V8 Supercars endurance races last year.

Morris will drive his Berocca Commodore at next weekend’s Townsville street track on July 6-8.