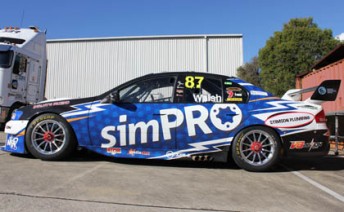 The side on view of Ash Walsh’s simPRO Ford Falcon

Dunlop Series driver Ash Walsh and his sponsor simPRO have unveiled a brand-new livery for the Sucrogen Townsville 400.

To launch the new look, simPRO has also revealed an exciting new competition, where one lucky V8 Supercars fan will receive an all expenses paid trip to this year’s Supercheap Auto Bathurst 1000 and become ‘The Face of simPRO.’

The winner will be chosen from contestants who best describe why they should be the Face of simPRO. Entrants will upload their submissions via video, with the winner to be determined by the most votes on various social media platforms.

The competition is open to all eligible Australian and New Zealand residents. 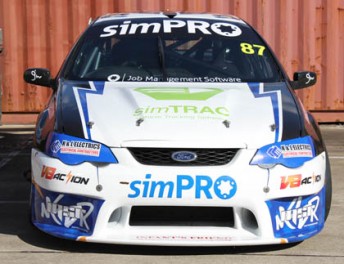 The front of Walsh’s #87 Falcon

Walsh’s new look has been designed by the team at simPRO. Marketing manager Ness Winter says that forming the livery was an enjoyable experience.

“simPRO Software is excited to have had the opportunity in designing Ash Walsh’s new car livery,” said Winter.

“We had the opportunity provided to us by Matt Stone Racing and Ash Walsh to re-design the livery and bring on board some of simPRO’s clients to join the sponsorship journey and experience with us.

“It has been a big project for our marketing team and a whole lot of fun.”

After two rounds of the Dunlop Series, Walsh sits in a competitive fifth place overall. He is testing at Queensland Raceway today.

For more on simPRO’s competition, go to faceofsimpro.com.au for entry details.