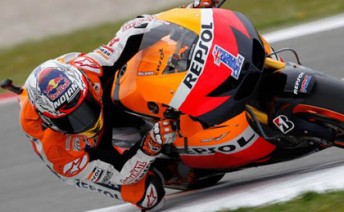 Casey Stoner at the Assen circuit

The retiring world champ saved his best until last in a mixed weather session, claiming the pole on his final lap and edging out team-mate Dani Pedrosa. Due to light and intermittent showers, Stoner looked destined to start tomorrow’s race from ninth, but the clouds parted in the final moments where Stoner pieced together an amazing lap of 1m33.713s to push Pedrosa back to second.

The result gives the Repsol Honda team the first two places on the front-row.

Factory Yamaha championship leader Jorge Lorenzo will start from third, but did not have an answer for the fast Hondas.

Cal Crutchlow jumped up the order late in the session on his Tech 3 Yamaha to take fifth ahead of Ben Spies (Yamaha), Andrea Dovizioso (Tech 3 Yamaha), Silverstone pole-sitter Alvaro Bautista (Gresini Honda) and the Ducati duo of Nicky Hayden and Valentino Rossi.