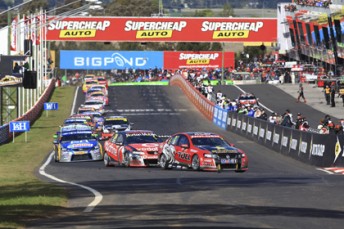 The coming two years will see a number of significant changes to the Mount Panorama circuit – Australia’s most famous motor racing track.

Thanks to a recent $3 million government grant, matched by the Bathurst Regional Council, the circuit will be resurfaced, have debris fencing installed at various points of the track, plus the removal of the earth-filled tyre wall at the exit of The Chase, replaced by a concrete wall.

It is a big task, but one that has been in planning for a number of years.

Doug Patterson, the director of engineering for the Bathurst Regional Council, explained to Speedcafe.com’s Grant Rowley how and where the funding will be used. 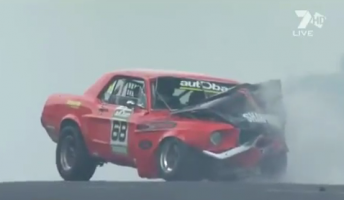 Touring Car Masters driver Andrew Whiteside collected the wall at the exit of The Chase last year. Improvements to the area will reduce the chances of this sort of damage

SPEEDCAFE: Firstly, can we clarify when the circuit will be resurfaced.

DOUG PATTERSON: The resurfacing will take place next year, soon after the 2013 Bathurst 1000.

As soon as we can get the contractor to operate, then that’s when it will start. The actual laying of the asphalt only takes around a week, but it’s the other preparation work like the adjustment of kerbs and the like which takes a substantial amount of time.

The main thing is that we have as big clearance time between laying the asphalt and the next event, which will be the Bathurst 12 Hour in February (2014).

SPEEDCAFE: Does this mean that Drive Bathurst wouldn’t be able to run, due to the resurfacing?

PATTERSON: We’re in discussions with Drive Bathurst and we’re working around them. If we can lay it directly after them, then that can be negotiated.

SPEEDCAFE: One of the safety changes that will be implemented to the circuit is the erection of a concrete wall at the exit of The Chase, just before the Armor All Bridge. We’ve seen some big and costly accidents at that point of the track. Is that being completed just on the grounds of safety?

PATTERSON: Yes. The existing sand trap is substantially lower than the edge of the circuit. It runs off fairly quickly and has been highlighted in previous discussions with CAMS and the FIA. It has been an area worthy of attention.

SPEEDCAFE: Will the angle that the wall points at the race track change?

PATTERSON: The actual, final layout is being discussed by CAMS. We have preliminary plans, but it will be such that it will not have the same angle that is currently in place.

The positioning of the bridge is fine. In our plans, we have positioned the wall to come back in on the alignment that fits in with the bridge. It will mean that you won’t have the acute angle of the concrete wall that we have with the tyres.

SPEEDCAFE: Will that work be completed before this year’s 1000km race, or will we still see tyre walls there?

PATTERSON: It won’t be done prior to this year’s race. It’s too close to the race date at this stage. We’re only three months away …

SPEEDCAFE: Just to clarify, no upgrades or changes to the circuit, using the funding that the federal and local government have pledged, will be completed before this year’s race.

PATTERSON: That’s right. We’ll be looking at calling tenders for the pedestrian lift at Harris Park. That is set to commence before this year’s event, but it certainly won’t be built.

SPEEDCAFE: Pit straight is the other significant change that will occur to the track. Can you explain exactly what the people at the track and the viewers at home will be seeing.

PATTERSON: The current redesign that is being considered by CAMS at the moment will see the removal of the guard rail along the driver’s right, all the way along Pit Straight, replacing it will a concrete barrier in a location approximently two metres behind the existing position of guard rail. That is the major part of it.

The other part is the installation of debris fencing, directly behind the first line of protection. That will be right along the outside of pit straight itself. That also includes the relocation of a substantial amount of services – lighting poles, additional drainage etc.

SPEEDCAFE: This change will make no difference for the drivers and teams, but it will make the look of the front straight significantly different, especially with an extra two metres of grass between the wall and the circuit …

PATTERSON: It will certainly have an impact on the visual side of the front straight. For us, it will actually improve the look of it. This will also allow drivers more space to take evasive action if there’s an incident on Pit Straight.

The debris fencing will have a small impact. The standard requires it to be 2.5 metres above the edge of the circuit, so overall, it’s not going to look anything like some mock-ups that the media has produced.

Visually, spectators will continue to have a very good view from Pit Straight.