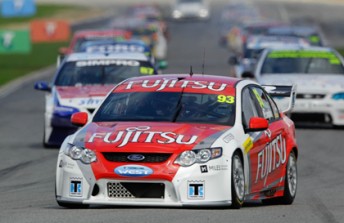 Leading Dunlop Series contender Scott McLaughlin has switched teams ahead of Round 3 of the series at Townsville’s street circuit.

McLaughlin, who won the last round of the series at Barbagallo Raceway and sits second in the title chase, has left Stone Brothers Racing, switching to its satellite team Matt Stone Racing.

MSR will now prepare McLaughlin’s Fujitsu Racing entry for the remaining rounds of the 2012 season.

While there will be some change, the Queensland-based driver will continue to drive the same Falcon FG that he raced with SBR.

The change for McLaughlin comes on the back of securing a new supporting sponsor, set to be revealed in the coming days.

The Dunlop Series supports the Sucrogen Townsville 400 for V8 Supercars at the Reid Park circuit in two weeks time.