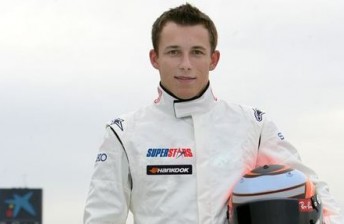 Austrian driver Christian Klien is set to gain more experience behind the wheel of a rear-wheel-drive V8 sedan prior to September’s Sandown 500 by competing in a round of the Italian-based Superstars Series.

Klien, whose resume consists of mainly high-downforce openwheel and sportscar experience, will race alongside Russell Ingall at Sandown and Bathurst in the Supercheap Commodore this year.

The 29-year-old will jump into the Superstars Series at the Hungaroring this weekend, driving a Maserati Quattroporte for Swiss Team Maserati.

Klien will face-off against Superstars regulars including Tonio Liuzzi and Gianni Morbidelli, who are both tipped to race in V8 Supercars’ other co-driver event, the Armor All Gold Coast 600, later this year.

According to Klien, the Superstars outing will be a definite help as he prepares for Sandown.

“This opportunity perfectly fits my tight schedule between working in the F1 simulator on race weekends for Williams F1 and heading to Australia to go testing with Walkinshaw Racing the week after,” said Klien.

“Your skills and reflexes can never get enough practice to stay sharp.

“This Superstars outing will be a great way to prepare for some other big races I have later in the year, like the V8 Supercar races at Sandown and Bathurst.”