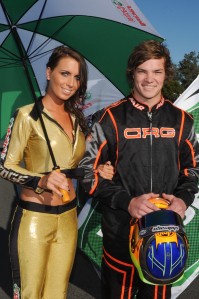 Reigning CIK Stars of Karting Series Pro Gearbox (KZ2) Champion Tyler Greenbury made a successful debut on European soil during the WSK Euro Series round at the La Conca circuit on the weekend.

Only few days after claiming victory in Round Three of the Australian series in Ipswich during his debut aboard a CRG chassis, the 19 year-old was competing against some high quality opposition on one of the world’s most famous karting circuits.

After taking some time to come to grips with the extreme level of grip on the circuit, Greenbury showed some strong speed during Sunday’s action to cross the line seventh in the main event.

“It’s a completely different world over here compared to Australia. The grip level on the track was out of this world and it took a fair bit of time to adapt to the conditions, both in my driving style and chassis set-up.

“During practice I had trouble getting my head around the speed of hitting 160 km/h at the end of the main straight, then it was about trying to work on a set-up. The rubber on the track was literally like a motocross rut that you have to run the kerb to miss, the only other option was run the middle of it to run right over it.

“I had a few dramas throughout the heat races, I think the two finals were the only two races that were incident free and as a consequence I was able to get a strong result.

“I learnt so much every day I hit the track and in Sunday’s final I was setting some fast lap times while moving up through the order.”

The event was won by Italian Negro Riccardo ahead of Netherlands’ Davies Dylan and Juodvirsis Simas.