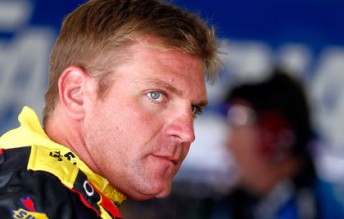 Clint Bowyer has taken a dominant victory at the Toyota/Save Mart 350 at Sonoma today.

The Toyota driver led 71 of the 112 laps and held off Tony Stewart and Kurt Busch in a green/white chequered finish.

The win was Bowyer’s first on a road course, his first for 2012 and the sixth of his career.

Brian Vickers had a solid run into fourth place, ahead of Jimmie Johnson, Jeff Gordon and Greg Biffle.

For pole-sitter Marcos Ambrose, it was a frustrating day. The Tasmanian led the opening laps but spent the rest of the day struggling to stay in the top 10 due to handling issues.

A late pace car allowed Ambrose to pick up a bunch of spots in the final laps, seeing him placed eighth overall.

AJ Allmendinger and Joey Logano rounded out the top 10.

The NASCAR Sprint Cup returns to oval track competition next weekend with a Saturday night race at Kentucky Speedway.