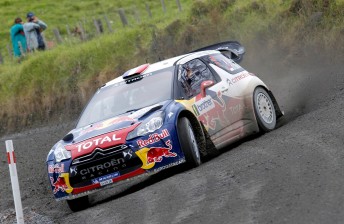 The Frenchman extended his lead over Citroen team-mate Mikko Hirvonen during a wet final morning.

The driver who has been on a charge was Thierry Neuville who posted two fastest stage times and has an eye on fifth placed M-Sport Ford driver Ott Tanak.

Ford World Rally Team’s Petter Solberg had a trouble-free morning to hold third at the wheel of a Ford Fiesta RS WRC.

Marcos Ligato continues to lead the Production World Rally Championship and remains on track for his first win in the support category since 2001.