Hunter-Reay doubles up as Aussies crash at Iowa

Hunter-Reay doubles up as Aussies crash at Iowa 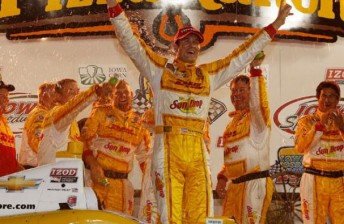 Ryan Hunter-Reay has scored back-to-back wins in the Izod IndyCar Series by taking out the Iowa Corn Indy 250.

The results see the Andretti Autosport driver move to within three points of championship leader Will Power, who crashed out early following contact with EJ Viso.

Hunter-Reay had been holding a 1.3s lead over team-mate Marco Andretti with three laps remaining when a crash from Katherine Legge ensured the race would end under yellow.

“That was very challenging,” said Hunter-Reay after the race, which started almost an hour late due to rain.

“We were sliding around a little bit more today. I have to thank Marco. They came here and tested. Marco put the setup on the car. When we came here, we tweaked it just a little. From there, we basically raced with what he tested.

“Marco and I raced really hard out there, really clean. It’s great to have a team-mate like that and we’re just so happy to be in Victory Lane twice in a row.”

Tony Kanaan and Scott Dixon came home third and fourth respectively, with the latter having led the race heading into the closing stages before being swallowed up by his rivals.

Australian Ryan Briscoe joined his countryman and team-mate Power on the sidelines after a collision with rookie Josef Newgarden on Lap 178 of 250.

An off-sequence Briscoe had been leading the race and preparing to make his final pitstop when Newgarden attempted an ill-fated pass.

Also out of luck was pole-sitter Dario Franchitti, who had been forced to pull-off the track on the warm-up lap with an engine failure.

The IndyCar Series continues at Toronto, Canada, on July 6-8.