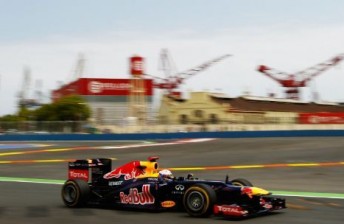 Sebastian Vettel will start tomorrow ‘s European Grand Prix from pole position after proving the class of the field in qualifying around the Valencia Street Circuit.

Pastor Maldonado and Romain Grosjean will share the second-row of the grid having both spent time at the top of the order in Q3.

While there were celebrations in Vettel’s half of the Red Bull garage, team-mate Mark Webber will start just 19th after suffering hydraulic issues in Q1.

Local hero Fernando Alonso will also have plenty of work to do in the race after qualifying 11th. Just 0.22s had separated Alonso’s Q2 time from fastest-man Grosjean.

Just 23 drivers had taken part in the earlier Q1 session, with Marussia’s Timo Glock unable to compete due to illness. It is at this stage unclear whether the German will be fit for tomorrow’s race.