Sebastien Loeb in the box seat at Rally NZ

Sebastien Loeb in the box seat at Rally NZ 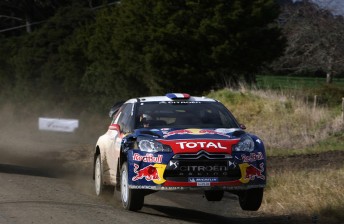 Sebastien Loeb is on target to win Rally NZ

Sebastien Loeb has come out on top on a day-long battle with Citroen Total World Rally Team Mikko Hirvonen to finish the second leg of Brother Rally New Zealand with a small 6.4second lead over his Finnish team-mate.

“We’ve had a good battle with Mikko today,” said Loeb.

“It’s been difficult this afternoon, very slippery and I really don’t like that Girls High School stage. It’s very technical and I lost about eight seconds there this morning. It’s exciting to have a battle with Mikko and tomorrow I will have to push to keep him behind.”

Portugal’s Armindo Araujo holds ninth at the wheel of a MINI John Cooper Works WRC despite losing time throughout the day with damper-related problems.

Rounding off the top ten is Monster World Rally Team’s Ken Block who is positively glowing on his return to the WRC.

The final day of Rally New Zealand will challenge the WRC crews with seven special stages that cover 61.33 competitive kilometres. The day will commence with the Burnside/Wech Access test, due to go live at 8:08hrs local time.