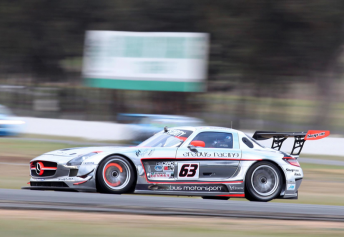 Peter Hackett has taken a contentious Race 1 victory in the first of two one-hour Australian GT – Protected by Sargent Security races this evening.

The Erebus Racing driver secured the win after a series of pit-lane penalties relegated leaders Klark Quinn and Greg Crick down the order.

Hackett had run strong early in the race, but a well-timed stop under Safety Car had seen Quinn and Crick jump to the lead. Both Quinn and Crick, however, were penalised for pit lane infringements during their compulsory stops, the subsequent drive-through penalties putting the Erebus Racing Mercedes Benz SLS AMG back to the front.

Eggleston was third with Quinn recovering to fourth at the finish to maintain his series lead.

Hackett was pleased to have secured the win.

“This win is incredibly sweet and really has put our championship back on track,” Hackett said.

“We’re ecstatic with the performance of the Erebus Racing SLS AMG GT3. It was a little chaotic out there with the Safety Car and black flags and weather approaching – it was tough to work out what was going on for a while.

“We couldn’t ask for anything more at this stage and hope that we can perform similarly tomorrow.”

Hackett’s team-mate James Brock, driving a Mosler for the Winton event, had a gearbox issue in both qualifying and the race.