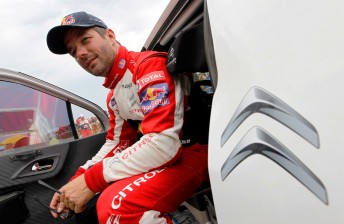 Rally superstar Sebastien Loeb heads a Citroen one-two at the end of the opening day of Brother Rally New Zealand.

The Frenchman leads team-mate Mikko Hirvonen by four seconds, while the Ford challenge faltered on mistakes and poor tyre choice.

“It was not an easy day but we are leading at the moment although only by four seconds and that’s not much so we will keep pushing hard tomorrow,” said Loeb.

“Today we chose the right tyre the whole time but now I only have two soft tyres left so for the rest of the rally we will only have the hard-compound option for the majority.”

Ford World Rally Team’s Jari-Matti Latvala was lying third until the Finnish driver collided with a fence on stage 7 and lost over four minutes trying to get his Ford Fiesta RS WRC back on the road. The incident saw Latvala drop back to ninth.

“I’m really, really disappointed. I can’t remember being this disappointed for a long time,” explained a disheartened Latvala.

“It was a combination left-right corner, but everyone had been cutting there so I went for the cut as well and the cars in front must have made a hole on the inside and the front-right wheel touched the hole and spun the car into a wire fence. The wire went into the front wheel and we couldn’t move anywhere. We had to wait until the farmer came with some side cutters but by that time I had lost four minutes,” added the 27-year-old.

Team-mate Petter Solberg had an equally troubled day after the Norwegian lost over a minute this morning after opting for hard compound Michelin tyres. He finishes the day fourth overall.

Competing in New Zealand for the first time, Thierry Neuville is sixth for the Citroen Junior World Rally Team. The Belgian driver reported problems with his pacenotes led to a spin during stage 3 but a drama-free afternoon saw Neuville finish the day 31s behind Estonia’s Tanak.

MINI WRC Team’s Dani Sordo struggled to find grip with the wrong decision to use hard compound tyres on the opening loop, but a clear afternoon pass saw the driver move up into seventh.

Another driver to fall foul of the wrong tyre choice was America’s Ken Block. Block was disappointed with the choice, and struggled further being out of the Ford Fiesta RS WRC since Rally Mexico. But a change to soft compound tyres for the afternoon loop saw the American win a day-long battle for 10th place with Austria’s Manfred Stohl.

“Plenty of sideways action out there this morning!” Block commented.

“The hard tyre choice was the wrong one for the morning loop but once the softs came on in the afternoon we had heaps more grip.

“We had a great battle with Stohl and I’m stoked we could catch him on the last stage and finish the day 10th overall.

“These stages are truly amazing and that Whaanga Coast is one of the greatest in the championship, I’ve had so much fun on the roads today.” Block added.