American IndyCar star Marco Andretti says he expects to run in the top 10 when he makes his V8 Supercars debut at this year’s Armor All Gold Coast 600.

The 25-year-old will line-up alongside Todd Kelly in the #7 Jack Daniel’s Racing Commodore for the event, which requires each entry to boast an internationally credentialed co-driver.

Despite the stark contrast between a V8 Supercar and his regular Dallara-Honda mount in the IndyCar Series, Andretti says he expects to be quickly up-to-speed against his fellow co-drivers.

“The sport is growing in popularity in the US and the event has become very popular among the IndyCar drivers, so I’m pumped about the chance to compete. 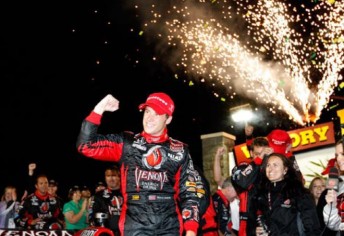 “In terms of results, I definitely want to be competitive. I expect to run in the top 10 and hopefully Todd and the Jack Daniel’s Racing boys can help me get straight up to speed.”

Should Andretti emerge victorious from either of the two 300km races that make up the Armor All Gold Coast 600, he will become the third Andretti to chalk up a win on the Surfers Paradise Street Circuit.

Marco’s cousin John Andretti took out the inaugural IndyCar Grand Prix held at the venue in 1991, before his father Michael triumphed in the same race three years later.

Marco Andretti himself competed in the last IndyCar race on the Gold Coast in 2008, having previously visited the circuit to watch his father race.

The 2012 Armor All Gold Coast 600 is set to take place on October 19-21. All 28 co-drivers will get the chance to test their respective mounts at Queensland Raceway on the Wednesday prior to the event.