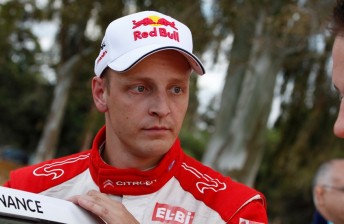 Mikko Hirvonen heads the WRC event after choosing to start first on the road in his Citroen. The weather gamble worked out with Hirvonen holding a narrow lead over his team-mate Sebastien Loeb after stage four.

Although the Citroen duo were cleaning the road in the opening stage, the rain arrived and they quickly benefited what was a deficit to Jari-Matti Latvala into a clear lead over the factory Ford driver.

Hirvonen has led since stage two, but Loeb has been the man to watch with two consecutive stage wins and the gap is 3.9s. Latvala is 16 seconds off the lead at the lunchtime break.

M-Sport Ford duo Evgeny Novikov and Ott Tanak are closely matched in fourth and fifth, but both had been trailing Qatar Citroen’s Thierry Neuville until the Belgian had a spin on stage three.

Latvala is the only factory Ford in the hunt for victory, as a decision to take hard tyres left Petter Solberg struggling badly for pace all morning. Down in seventh place, he is already a minute and a half from the front. Dani Sordo – back with the Prodrive WRC Team – also went for hard rubber and had his difficulties compounded by some gearbox oddities, leaving him eighth ahead of Armindo Araujo’s Portugal Mini.