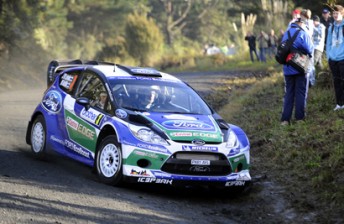 Ford driver Jari-Matti Latvala has set the fastest time in qualifying ahead of the Brother Rally New Zealand.

The Finn, driving his Ford Fiesta RS WRC, finished with a time of 2m31.8s and has earned the right to select the first starting position ahead of tomorrow’s opening day.

“More than half the competitive distance is on the first day so the start position here makes a big difference,” said Latvala, who admits his is not 100 percent fit after breaking his collarbone in a cross-country skiing accident back in April.

“I really tried hard to take the fastest time and this now gives me the perfect position from which to choose where I want to start tomorrow.”

Qatar World Rally Team’s Thierry Neuville rounded off the top five, completing the 4.86-kilometre stage with a time of 2m32.9s.

The top 13 crews will select their starting position at 1900 local NZ time.