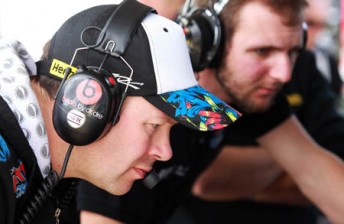 Barry Ryan’s experience will be welcome at Erebus Racing

Barry Ryan has been given a last minute call-up to bolster Erebus Racing’s engineering effort for this weekend’s third round of the Australian GT Championship, protected by Sargent Security at Winton this weekend.

A former engineer for Greg Murphy at Kelly Racing, Ryan’s vast experience provided a great deal of impetus to the Mercedes-Benz SLS squad at the Bathurst 12 Hour.

“The Erebus Racing team are a fantastic bunch of guys, their team spirit is something quite unique,” Ryan explained. “At Bathurst to see the guys’ development in their first endurance race as a collective was truly something. I’m really pleased to be asked back to give them a hand once again.”

He will work with the team’s existing engineers on Peter Hackett’s sole Erebus Racing SLS gullwing at Winton this weekend, with James Brock lining up in a Mosler after his car could not be repaired in time.

“Barry’s experience and guidance gave us an enormous boost at the Bathurst 12 Hour and we’ll be hoping that we can draw on that again this weekend and into the future to take our operation another step forward,” said Erebus Racing Team Manager, Ryan Maddison.

Last round runner-up Hackett will have a tough battle at the tight and twisty confines of the Winton circuit this weekend, with Klark Quinn looking to strike back after a few dramas with the V.I.P. Petfoods Porsche at the previous round.

Cameron McConville makes a return to GT racing with Nic O’Halloran in the Maranello Motorsport Ferrari 458 Italia, whilst Peter Conroy welcomes former Australian F3 Champion, James Winslow to his Audi R8. Roger Lago will make his first appearance in his GT3 Lamborghini this weekend after it was damaged at the Armor All Bathurst 12 Hour back in February.