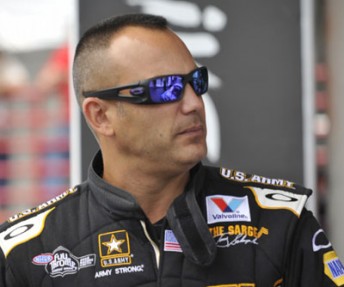 Tony Schumacher has taken the lead in the toughly contested NHRA Full Throttle Top Fuel standings after taking victory at the Ford Thunder Valley Nationals in Bristol over Doug Kalitta.

Schumacher’s 3.819 second pass was too good for Kalitta’s 3.802. On the way to the final he accounted for Dom Lagana, Championship aspirant Spencer Massey and Clay Millican.

Australian Top Fuel team, Rapisarda Racing made the field for the first time in several events, with Cory McClenathan lining up against Terry McMillen after qualifying 14th fastest. The former NHRA #3 was eliminated by McMillen in the first round.

John Force Racing created history that it won’t wish to remember, having all four of its cars eliminated in the first round – the first time it has happened to the team. The silver lining of that is that Robert Hight continues to lead the Championship, however Ron Capps is quickly chasing him down after his victory in Bristol.

Capps took the win over lady racer, Alexis DeJoria in the Tequila Patron Funny Car. DeJoria accounted for some big names on her way to the Final including Mike Neff in round one. Capps accounted for Courtney Force, Tony Pedregon and Johnny Gray in heading to the final.

Hight holds onto a 73 point advantage in the Championship.

Mike Edwards defeated Allen Johnson to take the Pro Stock win, his first of the year. His superior reaction time off the tree got him down the track first. HIs time – a 6.674 played Johnson’s 6.661.

Points leader, Greg Anderson was a big name casualty of round one. Coming up against the always tough Jeg Coughlin, he was defeated by the Pro Stock veteran.

Anderson continues to hold a 54 point advantage in the points chase over Jason Line and Allen Johnson.