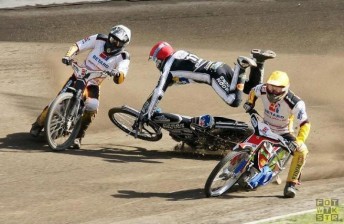 Double World Under-21 Speedway Champion, Darcy Ward will undergo surgery on a broken hand after a crash for his Polish club, Torun.

The star Australian is expected to be out of action after the nasty incident for at least this week, where his English club, Poole Pirates takes on Birmingham. It is not clear yet how much time Ward will have to take out of his busy international racing schedule.

The incident happened in Torun’s home match against Wroclaw in the Polish league – the world’s biggest Speedway league.

Former Poole Pirate and fellow Australian, Davey Watt has been drafted into the Poole squad for the match against Birmingham.