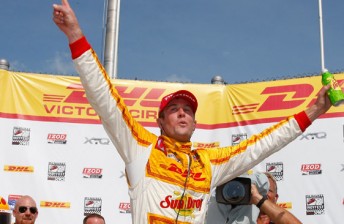 Ryan Hunter-Reay has scored his first win of the IndyCar season with victory in the Milwaukee IndyFest Presented by XYQ.

Rain forced a 90-minute delay, before Hunter-Reay fended off pole sitter Dario Franchitti and later in the race Helio Castroneves to win the 225-lap race of the famed Milwaukee Mile to beat home Tony Kanaan and James Hinchcliffe.

“I think that was one of the most physical races I’ve ever driven,” said Hunter-Reay.

“I was just hanging onto it the whole time. The car was awesome. The tyres did fall off a bit, but they’re so reliable, you have the grip when you need it, and it was there for me all the way to the end.”

Australia’s Will Power maintained his championship lead with a 12th place finish, which was helped by Franchitti failing to finish when he spun into the wall after brushing earlier with Ryan Briscoe.

Scott Dixon had a frustrating afternoon after he climbed to be as high a third when he was given a drive-through penalty for jumping a restart. The Ganassi team was left scratching their heads as the re-start in question was actually waved off.