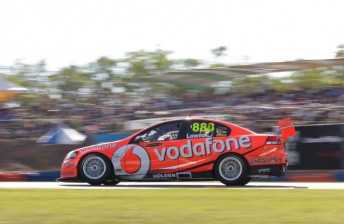 Craig Lowndes has scored his first win of the 2012 V8 Supercars Championship by defeating team-mate Jamie Whincup in a late-race scrap at Hidden Valley.

TeamVodafone proved the dominant force in a race typically dominated by tyre strategy.

Mark Winterbottom emerged best of the rest in third, albeit some 16.3s adrift of the race winner.

The Orrcon Steel FPR Falcon driver took the lead from pole-sitting team-mate Will Davison while on the hard tyres in the opening laps but proved unable to fight for the win on the softer rubber.

Michael Caruso took a fine fourth place finish despite falling to the rear of the field with a stall at the start.

Sixth place represented a reasonable recovery for Davison, who lost ground while pitting behind Winterbottom under an early Safety Car.

The yellow flags had flown following a clash between David Russell and Jason Bright on Lap 9 that saw the Pepsi Max Commodore spin into the Turn 14 exit wall.

Whincup, Lowndes, James Courtney and Jonathon Webb were the only four drivers not to pit under the Safety Car, setting up an interesting strategic battle between TeamVodafone and the other leading contenders.

While a now soft-shod Winterbottom made his way back into the lead by Lap 19, Whincup held onto the tail of the Orrcon Falcon before making a first stop of his own six laps later.

The three-time and reigning champion then completed a short middle stint to leap-frog his Ford rival in the final round of stops.

Lowndes meanwhile had struggled during his early stint on the hard tyres, falling back to 11th before making his first stop.

Rising to third by Lap 42, Lowndes would eventually prove too strong for all comers having saved a brand new set of soft tyres for the run home.

Several drivers had their chances dashed on the opening corner of the race, where Tim Slade found himself spun in the middle of the pack.

Russell Ingall, Alexandre Premat, Steve Owen and Rick Kelly were among those to sustain damage in the fracas, with the Supercheap Auto Holden an immediate retirement.

The 2012 V8 Supercars Championship continues in three weeks time with the Sucrogen Townsville 400.

See below for the full Race 13 result