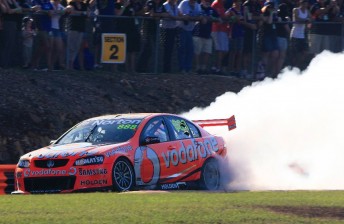 Race 13 winner Craig Lowndes has hailed his team’s decision to save a brand new set of soft compound tyres for the final stint of the Skycity Triple Crown at Hidden Valley.

Lowndes was able to pass four cars in the final eight laps of the 69 lap encounter on the way to his first win of the 2012 season.

According to Lowndes, the win was set-up during the morning’s qualifying session, where he managed to qualify sixth despite only completing one new-tyre run.

“Qualifying for us today was our weakest point,” said Lowndes after the race.

“We basically went out with a used hard tyre, then a used soft tyre and then had one crack on a new soft.

“It was disappointing not to be able to have two bites at it (on new soft tyres), but in saying that we wanted to leave a new set for the race.

“We knew we had good tyre life and wanted to be in a position where we could use it.”

Lowndes looked far from a winner however during his opening stint of the race.

Having used two of his four sets of soft tyres allocated for the weekend during Saturday’s opening race, Lowndes was unable to follow the strategy of the majority of the field, who chose to run three stints on the quicker rubber by pitting under an early Safety Car.

“We struggled a little bit during the early stages of the race on the hard tyre, there’s no doubt about that,” said Lowndes.

“Jamie was able to get a bit of a gap on us and I was getting mauled by the guys that had come in and put on the soft tyres. I was going backwards in a hurry.

“JJ (engineer Jeromy Moore) wanted me to stay out long enough to split up the next runs that we were going to do.

“We made an adjustment to the car at the stop, put the soft tyre on and it was quick. We then headed into that last stint with a lot of confidence knowing that we had the green set of tyres.

“It’s been a while since TeamVodafone had a one-two, and we worked pretty had to make sure it happened today.”

The 2012 V8 Supercars Championship continues in three weeks time with the Sucrogen Townsville 400.