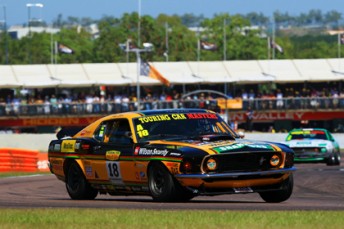 Class A round winner John Bowe

After winning Race 1 yesterday, the two-time Bathurst 1000 winner carved his way from 10th place in the reverse top 10 race this morning to take his second weekend win, before making it a perfect score in Race 3.

After a hot weekend, Bowe was rapt with his Darwin results.

“This is a great feeling! Three wins is terrific and not that easy to do.,” he said.

“The car’s been awesome here – it was quick from the word go when we unloaded, so we’ve made only small changes along the way because we’ve got a pretty good base setup now and we understand the car very well after three seasons. 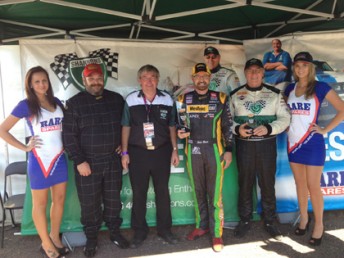 The Class A podium finishers at Hidden Valley Raceway

“It’s of great credit to Dick (Savy) and his boys (Savy Motorsport) that again the car didn’t miss a beat. The last race was easier than I thought it would be – I’d expected Jim to come with me out front.”

One of the most impressive performances came from Tony Edwards in his Holden Torana. The Victorian finished second in Race 2 and fifth in Race 3, enough to claim third overall.

Bowe’s round win leaps him to the head of the field, 11 points clear of Richards. Andrew Miedecke, Brett Youlden and Keith Kassule round out the top five.

In Class B at Hidden Valley, Shelby Mustang driver Steve Mason took the round win ahead of class leader Chris Stillwell and Amanda Sparks.

The next time the Touring Car Masters Series hits the race track will be at Queensland Raceway on August 3-5.