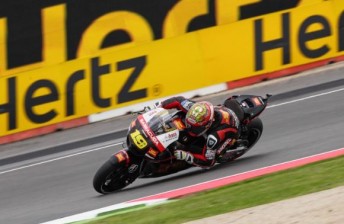 Alvaro Bautista has scored his maiden MotoGP pole position in a rain-hit qualifying session at Silverstone.

The Gresini Honda rider moved to the top of the order with 15 minutes of the 60 minute session remaining, before the onset of rain prevented his rivals going faster.

Ben Spies will start second despite suffering an off as the rain began to fall, while championship contenders Casey Stoner and Jorge Lorenzo finished the session third and fourth respectively having both tried in vain to improve during the final quarter of an hour.

The two factory Ducati riders were both able to walk away from sizeable crashes at the entry to Club corner during the session.