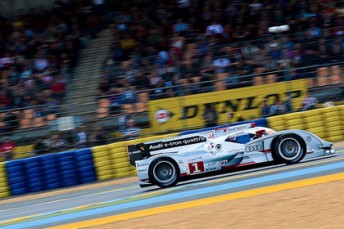 The #1 Audi on its way to victory at Le Mans

The #1 Audi led the majority of the race, only falling out of the lead twice – the first when the Toyota of Nicolas Lapierre snuck through early in the race, and the second when Audi’s #2 car, with Allan McNish at the wheel, took the lead during the early hours of the morning.

After the #2 hybrid took the lead, it was involved in a crash with a Ferrari, but the entry pushed on, despite needing the attention of its team. Le Mans legend Tom Kristensen took the car over for the final stages of the race, securing second place, one lap behind its sister car.

Fifth place went to the #3 Audi ultra after suffering several problems during the race, ahead of Australian international driver David Brabham in his HPD, partnered by Peter Dumbreck and Karun Chandhok. The trio finished 21 laps off the leading Audi.

The race was highlighted by a spectacular crash involving the Toyota of former Formula 1 driver Anthony Davidson. The Brit sustained a broken back in an airborne accident at the end of the Mulsanne straight.

Davidson suffered breaks to his T11 and T12 vertebrae after he collided with the #81 AF Corse, causing Davidson’s Toyota to flip spectacularly before crashing heavily into the barriers.

See below for vision of Davidson’s incident.

It would prove to be a difficult return for Toyota to the Sportscar scene, with the second entry retiring at the 11th hour of the race with engine problems.

In the other class, LMP2 was taken out by Enzo Potolicchio, Ryan Dalziel and Tom Kimber-Smith, driving for HPD.

GTE Pro was taken out by the Ferrari of Giancarlo Fisichella, Gianmaria Bruni and Toni, while the GTE Am honours went to the Corvette of Pedro Lamy, Patrick Bornhauser and Julien Canal.

The crowd-favourite Nissan DeltaWing only made it to the seventh hour of the race after crashing out. With Satoshi Motoyama at the wheel, the innovative machine collided with the #7 Toyota of Kazuki Nakajima. Motoyama tried to get the car restarted, but was forced to pull out.

See below for vision of Ant Davison’s spectacular accident.