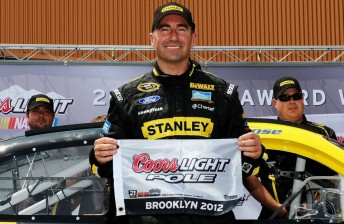 Australia’s Marcos Ambrose has scored his first career NASCAR pole position with the fastest speed of any driver in the sport in 25 years!

With a record-setting run at Michigan International Speedway, Ambrose won the pole for the Quicken Loans 400, leading 18 other drivers who broke the 200-mph barrier and 38 others who topped Ryan Newman’s previous track record of 194.232 mph, set in 2005.

Ambrose is the fourth driver to win a pole at a speed in excess of 200 mph, joining Benny Parsons, Cale Yarborough and Elliott.

“It is a good bragging right, I’ll give it that,” Ambrose said.

“I’m just really excited to get the speed, and to claim to be the fastest guy out there is just awesome. We’ve missed some poles — this is my first pole in Sprint Cup. We’ve missed some by thousandths of a second and conditions changing, so it’s good that we actually got one to stick, and one that’s got so many records attached to it.

“It felt that fast to me, too. It felt like I was getting it done. Really fun times out there. When you get onto the frontstretch, and you gain about 100 RPM in a mile, you know that you got everything you could out of the corner. We were wide open for about 98 percent of the lap, and I felt very good about how we got the car dialled in to do that.”

Here is the coverage of the lap