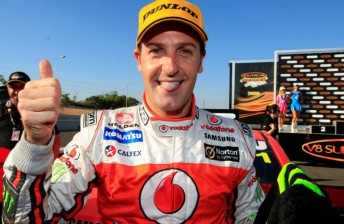 Jamie Whincup has described himself as “very encouraged” by the performance of his TeamVodafone Commodore after taking his first win in eight races today Hidden Valley.

The three-time and reigning champion out-paced his Ford Performance Racing rivals on both the hard and soft compound tyres on the way to a 5.88s victory over Will Davison.

The result sees Whincup wrestle the points lead back from Davison, with just two points now separating the pair.

“I won’t say we’ve had a tough start to the year but we’ve certainly had our challenges and we’re working through them,” said Whincup after his 55th career victory.

“Most of our fan base and our sponsors are asking us ‘what’s going on’ and at the end of the day we’re working hard to improve every area that we think we’re weak.

“Today is a good step forward without doubt. We’re still going to have to keep pushing hard right until the end of the year.

“Very encouraged by what we’ve seen here today, but we’re going to have to keep our head down and see if we can maintain this for the next three or four rounds.”

Whincup’s only issue during the race was his start – the Holden driver dropping from third on the grid to fifth heading into the first corner.

Despite spending time during a recent test day at Queensland Raceway simulating starts, Whincup says that he needs more practice in order to hone his technique.

“We did a lot of starts at the test day, nothing new at all but we’ve just got to do some more practice to get it right,” said Whincup.

“Adrian (Burgess, team manager) keeps saying that the F1 guys do it really consistently because they get plenty of practice.

“It still wasn’t a great start today but we’ll keep chipping away and hopefully by the end of the year I’ll get a good one!”

Race 13 of the 2012 V8 Supercars Championship will take place over 200km of Hidden Valley Raceway tomorrow.