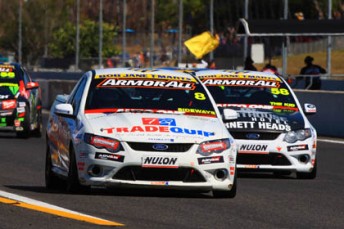 Sieders converted his Armor All Pole Award into Race 1 victory and said he was happy to secure his first win of 2012.

“It’s about time we won a race,” Sieders said.

“We got off the line well, the Safety Car closed the gap behind me and applied the pressure for the last lap sprint but I was happy to hold on for the first race win of the year.”

Sieders (Buttsworth Industrial Supplies) was in the clear for most of the race, after a great start off the line from Kim Jane, however Ryal Harris in his Rexel Electrical backed Ford was the big mover from his seventh on the grid to second, ahead of Sieders’ team-mate Andrew Fisher in third.

Monster Energy’s Nathan Pretty was the first Holden over the line ahead of Cameron McConville who moved into fifth after Jane was penalised 27 seconds for overlapping the Bundaberg Racing Holden at the re-start.

With a top 17 reversed grid for Race 2, Yanis Derums was on pole alongside Warren Millet in his Wake-up Holden. Millet got off to a great start, however after some early pressure Craig Dontas took the lead in his Thirsty Camel Holden.

Dontas held onto the lead for the first lap until Hansford passed him after Turn 1. The Truckline Racing Ford led for the remainder of the race, with Dontas pressuring him all the way.

“Craig was a bit quicker under brakes and I was able to keep him at bay and hang on to take the win, I just drove to what I needed to, to keep him there,” said Hansford.

“I’m really happy to get my second win for Truckline and Rentco and it was a massive turn-around to how the weekend started. I seem to do really well at Darwin and I hope it continues for the rest of the weekend.”

The safety car incident in Race 2 came during Lap 7 when Benn Wilson made contact with Jeremy Gray, forcing the JMG Maintenance Ford off the track at Turn 1. Wilson was excluded from the race as a result of the incident.

Gary Baxter drove well from eighth to finish the race in third overall, also his best result for the year.

Andrew Fisher came home in fourth ahead of Rentco Racing’s Kris Walton, who passed 24 Utes to end the race in sixth, giving him the SS Inductions Hard Charger Award and $500 cash.