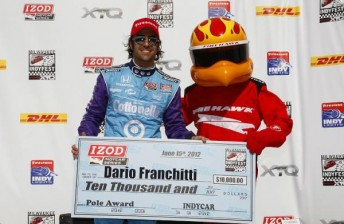 Dario Franchitti has stormed to pole position for the Milwaukee IndyFest Presented by XYQ.

Franchitti who was 18th on the IZOD IndyCar Series time sheet in the preceding practice, took his second consecutive pole at the Milwaukee Mile after recording a two-lap average speed of 168.737 mph (43.3100 seconds) in the Cottonelle car for Target Chip Ganassi Racing. He tied Al Unser for seventh on the all-time list with 27 poles.

Franchitti could make a significant dent in the championship standings this weekend as seven drivers, including Will Power and Scott Dixon, will incur 10-grid spot penalties for unapproved engine changes. Franchitti will enter the 225-lap race 63 points behind Power.

“I am very pleased as much as I am surprised,” said Franchitti.

“That’s quite a turnaround from practice. Practice is one thing, qualifying is another and then there is the race. For as warm as it is people are fighting the car and everyone wants the same line. I expect (the race) is going to be tough, especially at the end of a full stint on those Firestone tires.

“It’s going to be a long, exciting day and hopefully the Cottonelle car will be up front at the end of the afternoon. This is always an interesting track and we’ll see if we can get it done.”

Among the others receiving the grid penalty is Justin Wilson, who followed his first oval victory at Texas Motor Speedway with a front-row qualifying effort in the Sonny’s BBQ car for Dale Coyne Racing. His spot will be taken by Ryan Hunter-Reay in the Team DHL/Sun Drop Citrus Soda car for Andretti Autosport (167.911 mph). It’s his best oval start since winning the pole at Milwaukee for the CART race.

Power qualified fourth in the Verizon Team Penske car, but will relinquish that position to Rubens Barrichello, who is making his debut at Milwaukee in the BMC/Embrase/KV Racing Technology car. He’ll be joined on Row 2 by Helio Castroneves (166.763) in the Penske Truck Rental car.