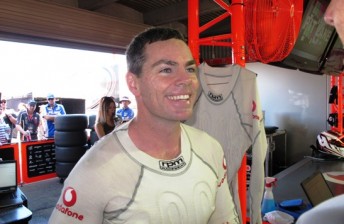 All smiles for Craig Lowndes in Darwin

Craig Lowndes has continued the strong form of the #888 TeamVodafone Commodore, setting the fastest time in Practice #3 of the SKYCITY Triple Crown at Darwin’s Hidden Valley Raceway.

Second fastest was Will Davison in the Trading Post Ford Performance Racing Falcon, a car which was not involved in the earlier sessions.

After watching his car in the hands of Scott Pye in the opening two sessions, Jamie Whincup put the #1 TeamVodafone Commodore into third place on the time sheets. Jonathon Webb was fourth, followed by Todd Kelly who took over from endurance co-driver Tim Blanchard in the Jack Daniel’s Racing Commodore. Team-mate, and brother Rick Kelly, completed just one lap with an engine related issue. He is expected to join all the cars in the final session which gets underway at 3.15pm local time.